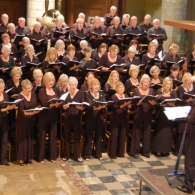 Ever wanted to sing ?

We are a very friendly mixed voice choir of just under 100 singers. We do not audition new members but we work hard to achieve some fantastic performances.

Come and sing with us

We don’t audition new members. Please do come and join us. No experience necessary just a love of music and an interest in singing.

Tickets for all our concerts can be found at:-

Graham is an experienced conductor, teacher and performer, and has taken choirs from humble beginnings to singing throughout Europe and performing on the London stage. He is passionate about making music accessible to everyone, and his energy and expertise ensure that singing together is both fun and educational, with members benefiting from his expert vocal tuition.  In demand as a conductor both nationally and internationally, he conducts several concerts each year in Moscow with the State Symphony New Russia Orchestra and English Philharmonia, with whom he is principal conductor.

Fei Ren graduated with a PGDip in Piano Performance with Distinction at the Royal Academy of Music in 2008, where she studied with Christopher Elton. She received the Lloyd Hartley Prize from the Academy in 2008, and was a Finalist in the Keyboard section of the Royal Overseas League competition in 2007.

Fei is a very busy chamber musician and has performed with various instrumentalists in venues such as St Martin-in-the-Fields and St James Piccadilly. As a choral accompanist she has also gained much experience with both professional and amateur choirs.